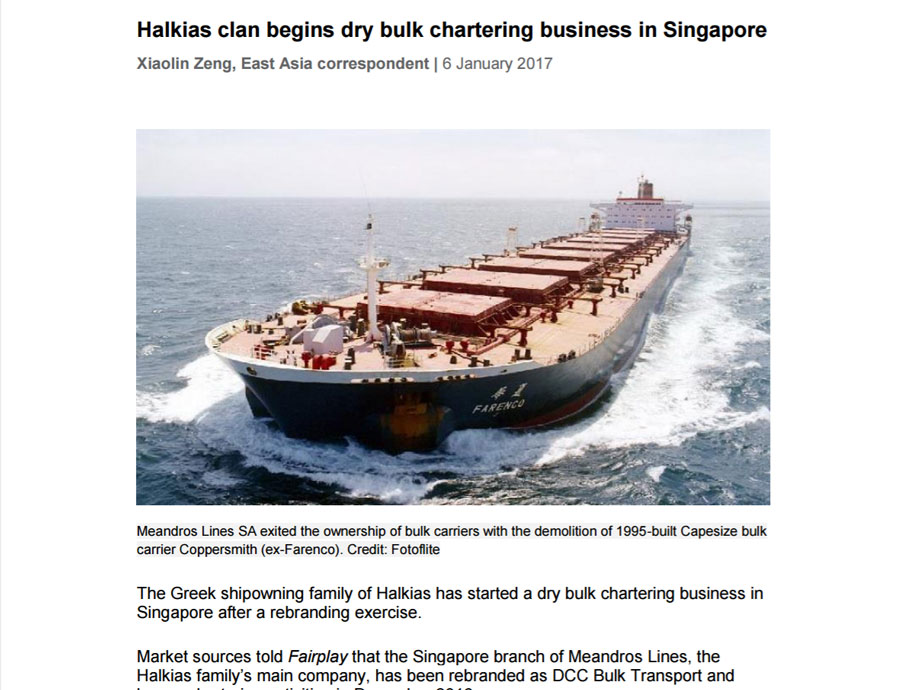 The Greek shipowning family of Halkias has started a dry bulk chartering business in Singapore after a rebranding exercise.

Market sources told Fairplay that the Singapore branch of Meandros Lines, the Halkias family’s main company, has been rebranded as DCC Bulk Transport and began chartering activities in December 2016.

The company’s registration was confirmed through IHS Fairplay‘s checks with the Accounting and Corporate Regulatory Authority of Singapore.

DCC is an acronym for Dynamic Cargo Carrier and the Singapore office, which is working on securing contracts of affreightment, will focus on chartering in Supramax bulk carriers.

In January 2015, Westgate formed a joint venture (JV) with the Tulshyan group that is also behind cash-buyer Wirana Shipping Corporation. The JV, RS Tankers Ltd, is registered in Hong Kong and commercially manages four Suezmax tankers. These tankers are on long-term time-charter to blue-chip clients such as BP and Vitol.

In the same year, Meandros Lines SA exited the ownership of bulk carriers with the demolition of 1995-built Capesize bulk carrier Coppersmith.

As the dry bulk market stumbled from late 2014, the Halkias group chose to focus on managing tankers.

Sources told IHS Fairplay that with the market showing some signs of recovery, the Halkias family decided to get back into dry bulk shipping in late 2016.